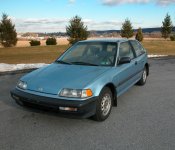 Today I have the opportunity to work on another old car.  While it isn’t exactly a “classic” like an Alfa GTA or ’55 Chevy (the ‘57s are just too gaudy for me) it is very near and dear to someone’s heart, so I am taking great care with it.  I am cautious when I drive it and try to let the wrenches caress the fasteners, rather than just man-handle them.  In reality, the car isn’t worth much to most of the world, but after spending some time with “Nellie” I have come to a conclusion:  they don’t make ‘em like they used to.

The beautiful thing about Nellie is how she is the last from a bygone era.  She’s not a big German luxury barge, nor is she powered by an American small-block V8.  She’s not even rear wheel drive.  (the horror!)  She’s just a humble baseline 1990 Honda Civic, but a completely capable car.  She’s as basic as they come—a reminder of simpler times before power windows, power door locks, power steering, and power outlets became necessities to get from Point A to Point B.  It makes me wonder what we’re doing wrong as consumers.

Over the years we have become lazy.  We have forgotten how to drive.  We’ve demanded the fastest, quietest, most coddling cocoon to wrap ourselves in.  We need air conditioning.  We can’t live without cup holders.  Our arms ache at the thought of having to exert effort while parallel parking.  The wheels beneath us cannot slip.  Brakes mustn’t lock.  A haunting voice will guide us to our destination (or not).  Wind must be seen but not heard.  And in the event of a collision (who allowed that to happen, anyway?!) we want to be surrounded by pillowy curtains on which to rest our weary heads.  (never mind that those same pillows explode with such force that they will take your head clean off if they hit at the wrong angle)

What we require the automotive manufacturers make for us is a car that has essentially the same base price as an economy car from 10 years ago, but boasts a laundry list of luxurious amenities that would make a Mercedes-Benz S-class from 1995 blush with envy.  This paradox got me thinking.  (something had to, eventually)

Every manufacturer must produce a product for a price.  It’s what they do.  The market for a small economy car seems to start around $15, 000 these days.  For that price you get a lot of car.   The raw material cost of the steel for the structural part of the car has gone up dramatically.  Due to safety mandates, the actual amount of steel has gone up, too.  More cost, more weight.

As expected, the drivetrain is far more advanced in the new model than in the old.  Nellie sported a whopping 70hp from her 1.5L engine.  The 2012 Civic doubles that output from a 1.8L.  That’s pretty impressive, but it does come at a cost:  fuel consumption and additional complexity.  Nellie averages around 40mpg on the highway and in the high 30s trundling along the back roads, all while making do with a humble 4-speed manual transmission.  You will struggle to get 28mpg on your city commute with a new Civic 5-speed.  Part of the problem in achieving is that added weight.  Nellie weighs in at a whopping 2,127 pounds.  Twenty-two years adds on a lot of fat:  467 pounds to be precise.  This is equivalent to hauling a family of three with you wherever you drive.  (or one resident of Alabama)

There are far more sensors and moving parts used in this new engine in order to achieve that lofty horsepower goal.  Honda’s i-VTEC, DbW, DIS, MPFI, and ULEV all work together to boost power figures.  (it seems engine performance is second in engineering priority only to the use of acronyms)  With more parts and electronic sensors comes the higher risk of failure, as well as the oft-higher cost of diagnosis and repairs.  But, in Honda’s defense, they do offer a really neat little feature.  If you want to be more efficient you simply take your hand off the wheel and eyes off the road to hit the big green ECON button and you are instantly rewarded with better fuel economy.  If you want to go faster, just hit the button again.  Ingenious!!  (though I do seem to recall something called a throttle cable which allowed you to instantly do the exact same thing with your foot, instead of diverting your energies from the task at hand:  driving)

Then there are the safety devices.   A 2012 Civic has 6 airbags in total.  Nellie has none.  You cannot order a new Civic without the following electronic nanny systems:  Vehicle Stability Assist, Traction Control, Brake Assist (whatever that is), Anti-Lock Braking System, Tire Pressure Monitoring System, Daytime Running Lights, and Electronic Brake Distribution.  (it seems that passenger safety is second in engineering priority only to capitalization and—possibly– acronyms)  You are also forced to purchase power windows and electronic power steering.  Nellie has neither and—in my opinion—is a better car for it.

Now comes the kicker:  the price.  A 2012 Civic DX starts at a list price of $15,605.  Nellie’s sticker was a shocking $6,635.  When you figure in inflation over that period, the equivalent car should cost right about $11,500.  So the question I’m left with is this:  are we getting a better car today than we did 20 years ago?  Safer?  Probably.  Faster?  Undoubtedly.  More efficient?  Nope.  More reliable?  Time will tell, but my money says no.  The recurring impression that I get when I spend time with Nellie is this: Hondas of this era were built to standard, not a price.  Sadly, I just don’t feel the same pride in so many cars built today.

In the end, after all of this consumer outcry for more power, further advancement and greater technical innovation, I still find myself longing for a dead-simple, efficient car that won’t cost much to maintain.  I guess I’ll have to raise my voice.