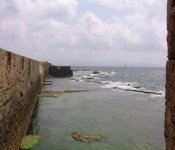 The journey through Israel/West Bank continues.  Episodes 1, 2, 3, 4, and 5 will get you the rest of the story so far.

It was late afternoon by the time we found the car again in the streets of Tiberias (it was right where we’d left it) and decided to head to the coast for dinner.  Our destination would be Akka (Acre).  It had several draws, the biggest being the fact that it was right on the Mediterranean and the second was that it had a high probability of containing at least one restaurant.

We climbed up the switchbacks over the mountains that separated the Sea of Galilee and the coast.  It is only about a 25 mile drive, but it took some time as the progress is slow due mainly to traffic of vacationers clogging up the two-lane roads.  (How dare they ruin my holiday!)

We parked along a boulevard and walked to the coastal wall. The wall that protects Akka from the Mediterranean is, like nearly every structure there, built out of tan stone blocks.  The wall extends around much of the city, with the top of the wall forming a street lined with fish markets and cafes.  (It should be noted that these cafes were not necessarily of the same  caliber that one would find scattered about around Les Halles, in Paris.  Instead, they are more in line with the type of cafe you would expect to see next to a fish market.)  The wall extended down a couple of stories toward the water level, then extended out for another 30 yards to reach the sea.  This floor seemed a bit of an odd extravagance, until I noticed how well it kept the waves from damaging the wall, at least for the 20 minutes I stood there watching them rolling in. END_OF_DOCUMENT_TOKEN_TO_BE_REPLACED