Travels with Gordie: In Search of Britain, Part 1

I was due for a vacation. It had been weeks since my last one, and I noticed that fatigue was setting in. I couldn’t eat my own body weight anymore, and I was having trouble sleeping more than 12 hours a day. I needed to get away, but wasn’t sure just where or how. It was a terrible dilemma.

I already knew who would join me. My friend Gordon would join me—that was a given. We’d been on many trips together over the years: Vermont, Delaware, Maryland, all over Pennsylvania, Vermont again, Virginia, Massachusetts, Vermont again, New Hampshire, and Vermont. In fact, we’d been to Vermont so often that I considered becoming a Phish fan just to make the locals hate me even more for intruding on their state. (It is also strange, considering that I like New Hampshire more.) A couple of years prior we had flown out to visit a friend of mine in Seattle, where we proceeded to drink our body weight in espresso-based drinks every day. I always preferred to drive to our destination–not for the convenience of it, but for the enjoyment of hitting the road and listening to Gordon’s astute observations of the world. Since we had flown once, we could fly again, so it opened up our options.

I had kept in relatively close contact with my college roommate Brian, who happened to be studying as a thespian in London at the time. (I had to have him repeat his area of study several times before I was completely sure of his approach to life.) Sure enough, with little arm twisting and sulking, I soon found myself with an open invitation to stay with him in his flat in Kensington. Huzzah!! Plans were made for a June visit, and I set off to pack the car.

Taking the train from Lancaster into Philly, then onto Newark, I was pleasantly surprised at how enjoyable the whole experience was. Seamless, quick, climate controlled transportation: Amtrak at its best. That is, until we got behind a “local” train, which clogged up the tracks as it stopped at every possible station along the line. (And, I suspect, several that the conductor ad libbed just to make our lives more miserable.) We suddenly found ourselves suffering from Atherosclerosis of the Mid-Atlantic artery. Thankfully, this hiccup didn’t delay us for more than 45 minutes, and we could still hop on the nifty transfer monorail and arrive at Newark International in plenty of time.

At 9:45PM we boarded the Virgin Atlantic 747-400 to the sound of Jamiroquai thumping through the sound system and made our way under the mirror ball, across the dance floor, and past the full bar in First Class, where we were herded to our seats in Coach. Based upon my previous domestic airline experiences, I fully expected to be spat upon routinely throughout our flight. Instead, I found the flight incredibly delightful, and the service superb. I was seated between two quiet Germans and a Virgin host saw to my (nearly) every need, lavishing me with either Earl Grey or Stella Artois whenever I ran out and wasn’t in a pleasant slumber. Gordon, seated a few rows back, wasn’t quite as fortunate. He was seated between two Pakistani businessmen who constantly leaned in front of him and chatted loudly in Urdu about something or other all night long, preventing him from getting any sleep at all. Gordon suspected they were comparing how long they had gone without bathing.

We touched down at Heathrow at 9AM and headed to the rental car counter to pick up our Vauxhall Vectra. After several minutes spent explaining to them that I did not want a Volkswagen New Beetle (since they were littering the streets at home and driven solely by teenaged girls.), but the Vectra that I had reserved, they were adamant that I at least try the Beetle. “It’s really quite nice!” was their argument. I was still not convinced. After another 10 minutes throttling the fleet manager, I wrestled the Vauxhall keys from her hand, and we headed for London proper.

Dropping down off the M4 into Chiswick, I inquired in a mild state of panic as to which direction I should take to get us to Kensington. I looked to my left to see my navigator fast asleep. I decided to head to the right and it appeared to be the correct choice, since that is evidently where I would have the greatest chance of getting lost, stuck in a traffic jam, and/or hitting a pedestrian. We tooled along the Thames for a bit before stumbling into the traffic circle at Westminster Abbey. I continued around the circle in the inside lane for several revolutions, trying to take in the sights without taking out other cars while Gordon noted “Big Ben…..Parliament.” as we passed each time.

After several more traffic jams and circles we found ourselves in the borough of Kensington, amongst the affluent and influential…and Brian. We drove along Bayswater, diverting our gazes from the draw of Hyde Park to try to find the building that contained Brian’s flat. His directions were clear: Lancaster Gate. That narrowed our choices down to one of approximately 25 buildings. I found a parking spot, and we began walking, avoiding all the American teenagers on school-based holiday that were strewn about the sidewalk. They placed themselves in the middle of the walking paths and sat cross-legged, speaking loudly about nothing in particular, but managed to insert far more “likes” and “you knows” than they should use in an entire lifetime. 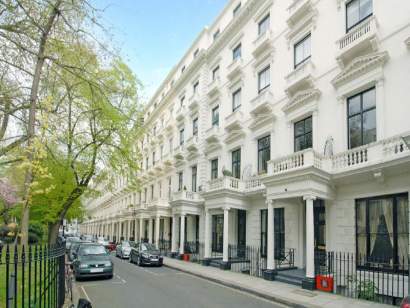 The wonderful/frustrating thing about buildings in Kensington is that every single one of them seems to be built out of the same white stone. While this lends a very classy look to the area, you cannot simply say “We are in the purple house with brown trim, just after the yellow one with the black front door.” It makes navigation a bit of a challenge. We walked past the Columbia Hotel with a grey Bentley and blue Ferrari 456 in the car park and crossed the quiet street to a building that looked like it might contain a block of flats instead of a gaggle of American teens. We ducked into the shade of the alcove and scanned the list of tenants on the buzz-box for Brian’s name. There it was, at the top. After 18 hours and numerous modes of transportation, without any clear idea of how to get where we didn’t know we were, we found ourselves at our friend’s doorstep. We had arrived.