There was a time in my life when I could identify any car being produced.  Granted, it was probably during my time spent in purgatory (also known as Junior High) when I had nothing better to do with my time than peruse the stack of auto literature my brother and I had.  We amassed these annals from various car shows and dealer showrooms visited on family excursions throughout the years.  Our shared bedroom was akin to a small, stuffy library of all things automobile and tractor.  (Although the familiar scent of library mildew was missing, it was more than made up for by the fragrant bouquet of dirty clothes strewn about on my half of the floor.)  Since, in our household, the television was seen as a treat on par with a day at the zoo or eating sugared cereal, we would spend rainy days perusing the various brochures, learning as much as we could about each model.  We studied horsepower and torque curves, engine displacements, transmission options, and cylinder configurations.  I could spit them out ad nauseam, and it often resulted in just that.

Perhaps even more importantly, we studied the body lines and trim details of each manufacturer.  Designs seemed to actually carry a purpose at that time.  There was a family resemblance within a brand, and each car had its own distinct design within the clan.  A Ford looked like a Ford.  A Mercedes was, unmistakably, a Mercedes.  A Citroen, sadly, looked only like a Citroen could.  Surprisingly, my hometown had a grey-market Citroen dealership that seemed to come and go with the seasons.  Upon sighting a Citroen BX Break* kneeling curbside, passers-by would often change facial expressions from curiosity, then shock, and eventually ending in a lasting grimace of disgust.  This fascinated my young, impressionable mind.  I knew there had to be something intrinsically wrong with a company that could produce a car so vile on the outside, yet also had the audacity to sport a one-spoked steering wheel in the interior.  There was no escaping itself.

*aka “wagon” or “estate,” but if owners of early-models are ever asked,  the original name seemed aptly chosen by the factory

If that Citroen had any redeeming qualities, other than its fantastically plush suspension, it had to be the fact that it looked like a Citroen.  Here was a car that an owner could be proud of owning (but definitely should not be).   There was absolutely no mistaken identity as it passed, even if the driver wished one for himself.  No, this was a time when a car was a car and there were no games of disguise—no smoke and mirrors.

I cannot recall when it was that I came to realize my handicap.  One day I just noticed that a lot of the cars started to look the same to me.  I tend to think that the root of the problem began when our domestic manufacturers started sharing platforms back in the 1960s.  However, they did tend to look distinctive, even within body codes.  This lasted until the late ‘70s or early ‘80s when you could walk into an Oldsmobile, Buick, Pontiac, or Chevrolet dealership and order a Cutlass, Regal, Grand Prix, or Monte Carlo (respectively) and from several car lengths away, the average person on the street would not be able to tell the difference between them.  Save for the wonderfully evil turbocharged V6 available in the Buick, there really wasn’t any.  (Most had the Chevy small block installed.)

Somewhere along the line a lot of the Asian car lines started looking the same, too.  In fact, by the time they started being imported in significant numbers, the styling among most of the brands had already melted into some nondescript form of the 3-box shape and left no lasting impression on the heart.  A Stanza looked like a Cressida, which looked like either a 626 or an Accord.  I can’t be sure.  Gone were the distinguished lines of the original Datsun Silvia, replaced with the ho-hum Maxima.  Or Altima.  Toyota even went as far as to seemingly blatantly copy the design of the Mercedes S-class (their target) when the Lexus LS400 was first introduced.  I’m told that imitation is the sincerest form of flattery, but I have my doubts if Stuttgart was terribly impressed.

Europe is not immune to this, either.  A Volvo is no longer a Volvo, as many were based on the same platform as a Mitsubishi and built in Holland, not Gothenburg as Thor intended.  Volkswagen has VW, Skoda, and Seat, which all seem completely transposable.  Even Italy– the home of all the automotive styling houses that seem to matter–has been having its struggles lately.  Fiat and Lancia are interchangeable.  Ferrari and Maserati share platforms.  Thankfully, Alfa Romeo has been able to keep its love-it-or-hate-it nose and tail treatments.

Last weekend I had the honor of attending the first movie theatre experience of my niece and nephew as we all saw Cars 2.  About a half an hour into it I came to the conclusion that the most memorable cars in the movie are the ones that I can actually remember seeing on the street.  Mater looks like a mid-‘50s Chevrolet truck.  Doc is a Hudson Hornet.  Ramone is an Impala.  Luigi is the wonderful Fiat 500 (the original, mind you). Fillmore is everything that is wrong with the VW MicroBus culture.  Lizzie is a Model T, without question.  There is no mistaking Sally for anything other than the Porsche 996.  (She must be an emotional wreck, what with the tear ducts constantly welled-up, ready to gush at any moment.) 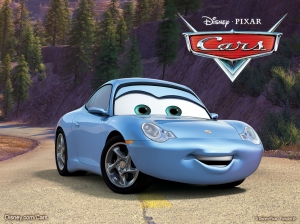 Lightning McQueen is the only car from Radiator Springs that doesn’t look like a car.  He looks like…NASCAR.  (Which is to say nothing at all anymore.)  While I enjoyed this newest movie almost as much as I did the first, I found that all the other characters that don’t actually resemble any particular make or model of car just blended into the background after a while.

I think the same can be said for today’s automotive marketplace.  We have more choices in cars than we ever did before, but they all seem to be the same.  There is very little distinction between marques these days.  We, as buyers, have to squint to make out the differences between brands.  When we open the hood of a Ford, it says Mazda underneath.  Buy a Honda, and it’s built by Isuzu.  The manufacturers feel forced to do this to remain efficient and competitive in the global market, but in doing so have alienated the loyal followers that made them global players to begin with.  The consumer feels duped.

There are a few exceptions.  A New Beetle looks like it sounds.  A Mini Cooper is a fantastic car that everyone seems to adore.  The Fiat 500 is selling like hotcakes because they make the beloved Mini seem like an absolute bore.  There is a small problem (ahem).  These are all compact cars.  They are cheap to produce and represent a small loss to the manufacturer if they flop.  For those of us needing (okay, wanting) something bigger, we are forced into the land of the bland.  There have been a few exceptions to this in the past few years, but none that I can recommend in good conscience.  The first would be the Pontiac Aztec, which was so outrageously ugly that hoards of people were heard chanting in the streets of downtown Detroit for the immediate return of Citroen.  The second rule breaker is Chris Bangle’s hideous line of BMWs.  The 5, 6, and 7-series got so bad that I almost sold my E30 as a form of protest.  I long for the day when I can buy a brand new car that is as simple, reliable, and uniquely classic as a 1957 Chevy sedan.  (If I’m honest, I prefer the ’56.)  I sense that I am not alone.  I sense it is time for a revolt.  Dare I say it?  “Bring back the BX!”